My husband and I decided on a very ambitious trek for our first time backpacking and being flat-landers.  We ended up making it over two passes, enjoyed a ton of amazing scenery, met face-to-face with God, and hiked over 20 miles in 3 days.  We are very proud of that and can’t wait to go back for round two!

So we were supposed to find a campsite tonight either South of Carbondale on 133 or South of Aspen on 82 to finish acclimating. Last night we stayed in Fort Collins with Adrian’s uncle, and we had a blast. Even though we got there late due to Southwest overbooking our flight, we were happy campers because they gave us over $800 in vouchers. Since last time we came to Colorado I got such bad altitude sickness for not acclimating, we wanted two nights prior to the hike. We drove past the Carbondale exit and decided we wanted to acclimate at a slightly higher altitude (8,200′ compared with 6,100′). On the way we decided to drive down Maroon Creek Road a bit just to see if any of their campsites were open, which we knew was unlikely. On the way we saw a bear near the road about 20 yards from our car. He just stared at us while we took a picture, acting like he would rather not have anything to do with us. We got very excited driving down the road as the scenery was like something out of Chronicles of Narnia. As we reached the ranger station, we were informed that all of the Maroon Bells campsites were full as well as the Independence  Pass sites. We had no other options for a hotel, so he told us our best bet was to hike the 2 miles to Crater Lake and camp there as there should be about 2 spots open. We hesitantly agreed since that was at 10,000′, and we didn’t think our bodies were ready for that yet. As we started packing our things and changing clothes in the parking lot, we felt very rushed, uneasy, curious, and excited. We brisked past the Maroon Lake, snapping a few photos, and vowing to spend more time there on the return. We had less than 3 hours until dark and no idea how everything would pan out at Crater Lake. We began hiking and through the rush and chatter we ended up on a smaller trail that leads, we think, up to one of the 14ers to the South. Adrian was the first to point out that this trail wasn’t as easy to spot as the previous one, and he thought we had gotten off of the popular route to Crater Lake. We pushed on for a bit, trying our best to navigate and work together but steadily becoming uneasy as the sun kept getting lower. Our trail finally dead ended so we turned around to find the main trail again. There was a big area of rocks, and we ended up heading down a dry creek bed into the think woods. I finally lost it, and Adrian immediately prayed over me. He asked God to lead us out, scared, confused himself. Within minutes we heard a loud cough and called out. Two young men were just 30 or so yards above us and we followed their voices right to the very obvious and very close trail that I now have no idea how we could have missed. We walked with these two boys, and found out they’re both very solid faithful Christians, missionaries at times even. I wholeheartedly believe God sent us those two boys to rescue us and teach us about trusting Him instead of panicking. We finally reached Crater Lake and found a campsite. It turned out a guy had hidden his pack and tent there that we didn’t notice until we had began setting up. We moved our tent a bit away, and met him during our dinner as he was coming back from a day hike up a 14er. He was really nice and let us stay in his campsite. He too was a solid brother in Christ, attending seminary and leading guitar for worship. He was really chill and humble. I see God all around here. I pray for navigation tomorrow, trusting in God’s guidance. Tieing a bear bag proved to be difficult, but sufficient. Dinner was okay, but much appreciated after a long day.

We had a hard time sleeping as there was a night storm during much of it (it ended up raining every night and not once during the day as other trip reports had noted). We were also awoken at every forest noise. During one of our wake-ups, Adrian asked me if I could memorize something with him: The Shepherd’s Prayer, Psalm 23. He said it calmed him last night after our stressful evening, and that brought serene peace to my heart as well. We discussed how God is creator of all things, and we are so tiny, yet He loves us personally. God created the creeks, the bears, lakes, ridges, trees, and wide array of wildflowers. We can do nothing to control these things, yet God loves us so much that he knows each hair on our head and called us by name in the womb. I haven’t been in a place where I had to truly fully depend on God’s providence and grace in a while. This brought about a healthy fear and awe of who He is but also a new strong trust in His steadfast character and sovereignty. 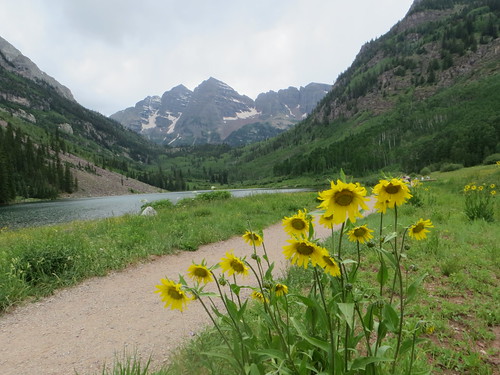